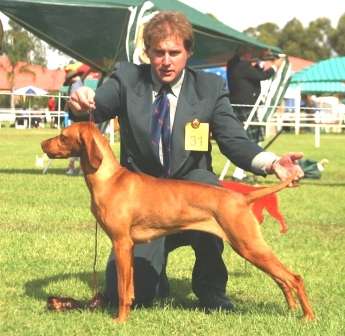 Tique is a pleasure to own as our family pet. She has a beautiful temperament and a graceful elegance about her. Her life revolves around chasing birds and lots of pats and cuddles. She is a wonderful gentle playmate for our children.  Tique is litter sister to our top winning BIS Aust Grand CH Iceana Gold Point ET JD. Tique with some good quality competition has become a multi best of breed, class in group and show winner. It has been hard for her to win over her top winning brother Alf but she has won many classes in group and show. Tique has the same classical appearance as her brother.

Tique was  #3 show bitch in Australia on the 2004/2005 Rozsda Catharina Memorial Trophy point score with very little showing.  Tique was not conformation shown for most of 2005 as she was having too much fun developing her agility skills in preparation for gaining another title.  She reentered the conformation ring in June 2006 winning a Class in Group at her first outing.  Tique whelped a litter in 2007 and her offspring have become class in group and show winners.
Tique  is dam of Aust Ch Iceana Orinoco Flow

Click back on your browser to see more of our Dogs.