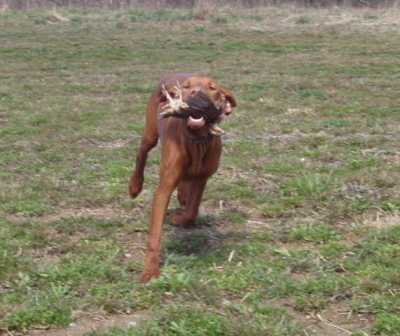 Hungarian Vizsla hunting in Australia
Captain Karoly Baba was a founding member of the first Vizsla Club in Hungary in 1924 and published the following article in Nimrod magazine in January 1929.
Much of what he says is still relevant today , so we have decided to share his article with you.
My Thoughts Regarding Vizsla Competitions
By K. Baba 01.01.1929
Let us take our Hungarian Vizslas to ever more competitions so that we may select those which most nobly represent us in the future and be most suitable for breeding.
Only attractive and constantly well exercised hunting dogs should be used for breeding because only their offspring have any chance of competing successfully. Without practise, the so called “indoor” Vizslas, however outstanding the abilities of their parents, rapidly lose their inherent hunting instinct, their acute sense of smell and their quick reactions, and, when matched with similar “house” dogs, the young ones show less and less of the right Vizsla temperament.
I should be grateful to hear the opinions of Vizsla owners on this matter and to learn from their experiences, but above all I would like to convince them of the importance of competitions.

I should also mention that, over the last few years, our Vizsla clubs have tended to prefer organising shows instead of competitions, and that, putting aside the Hungarian Vizsla competition, there has been only one comparable event this year. I feel that competing means not only displaying the dog’s abilities, but submitting their appearance to scrutiny too. If we ignore competitions I fear Vizsla owners will sooner or later lose interest in preparing their dogs for shows.

For good breeding it is most important that dogs be selected for the purpose, that they should attend competitions and be awarded prizes where these are deserved. I believe the dog’s appearance and its ability to perform as a gundog merit equal consideration.

Nowadays, there is general satisfaction if we call a Vizsla a “champion”; all sing it’s praises, wish their own dogs to breed from it or try and buy its pups. Often they forget to consider the dog’s nose or enquire about its hunting ability.
Forgive me, but I –  and many of my Vizsla owning friend –  prefer to go hunting with my silver or bronze medal winner than take a “champion” show dog for walks.

Our shows make little attempt to judge a dog by its “nose” and many Vizsla owners are concerned only about their show dog’s appearance.

Let us see how this affects the breeding of offspring. While pups of attractive but poor nosed champions might very well look nice, their hunting ability is sure to suffer. We must try and interest people in Vizsla competitions so we may discover fully deserving champions, from which future generations might be bred, and this means taking into account the dog’s complete range of abilities, otherwise we shall end up with inferior champions.